They include legume seeds, sweet potato vines, cassava cuttings and brachiaria splits, which are hard to find in local agrovets. Quality seeds are a prerequisite for achieving higher yields

"Hardy meat goats with potential for milk production. Does can reach 45kgs liveweight and bucks 60kgs. Capable of producing 1 litre of milk per day."

Green gram (Vigna radiata) belonging to the Fabaceae family is an annual leguminous crop which is grown for its seeds, which are a high source of nutrients.

Camel Research and development in Kenya

For camels there are no organic guidelines and regulation, however the organic principles should be respected, kept and practiced. 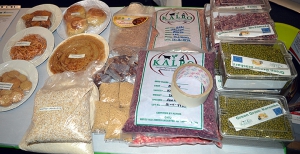 The Catholic Diocese of Kitui is the implementing partner of the grain amaranth technology. Whose aim is to  up scale the grain amaranth production and consumption in the semi-arid lands of Kitui County, eastern Kenya.  The project is taking place at Muthale, Mwingi, Mutomo and Kitui. The project targets s 25,000 farmers in the four implementing areas. The ultimate beneficiaries of this programme are the vulnerable groups in Kitui County. The entry point has been through the support groups of people infected and affected by HIV/AIDS. and other interested vulnerable groups within the communities. The project is at its final year of implementation as per the agreement between KALRO and Catholic Diocese of Kitui.